February 17, 2016
For the last number of weeks when I have not been in production mode on my Scrap Buster quilt, or hand stitching one of several boutis projects in process, I have been working on some new quilting and boutis designs.  A new rose window design for boutis is almost ready to be transferred to fabric.

This time the design is inspired by the rose window in the south transept of Notre Dame Cathedral in Paris.


When I had completed the stitching on this little square of boutis and was looking for a way to finish it, 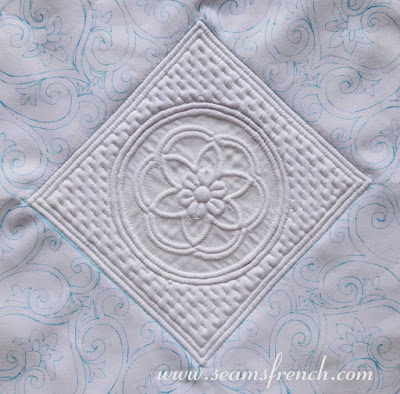 the idea to combine it with free motion quilting and create a larger wall hanging (below) came as an afterthought.


I quite liked this idea and decided to try it again, this time making the window completely into a boutis piece.

Using our photo of Notre Dame Cathedral as the basis for the design, my Autocad enabled husband has made a template that I can use to create my pattern.

In the book, "How to Build a Cathedral", by Malcolm Hislop, Ivy Press, UK 2012 (ISBN: 978-155-267-571-7), I found a tracery image (below, left) of an original sketch for the south rose window. The "Paris Rayonette" style, as it was named because of the radiating lines from the center out, was popularized during the French Gothic period, and became the standard for many French cathedrals. The actual window that was constructed between 1250 - 1270 (below, right), was designed by architect Jean de Chelles and Pierre de Montreuil. It simplified the earlier design from 16 radiating segments, to include only 12 segments in the final build in 1260.

I am referencing the original 1250 tracery because I like it's lacey characteristics.


Using the autocad drawn version of my photo as the template, I am in the process of creating the design. The first step is to trace the basic lines and create 1/8" (or less) channels. From there, I will add any other detailed design elements that I would like to include in my final pattern. 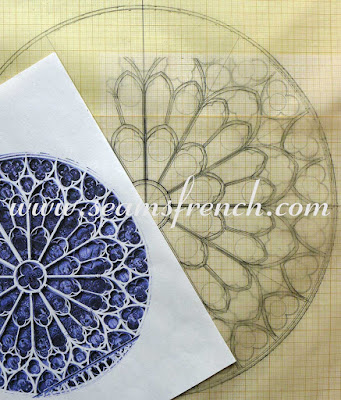 This is the first of several boutis pieces that will become part of a larger wall hanging.

November 20, 2013
The door of her cage has been opened. She is free to fly off and find her destiny.


After many months of hand stitching and then many more months of cording, my little "calibri" is ready to set off on her own. As this was my first attempt at designing so large a boutis piece, it has been a bit of a learning curve. All of the tight swirls, curls and circles are a great deal more difficult and time consuming to cord then are the longer more gentle channels. Maintaining an even tension is absolutely necessary throughout the process, so patience comes in very handy when doing the cording.

Once all of the stitching and cording is complete, the boutis must be washed and squared up. After it is soaked overnight in a basin of water with a mild detergent, it gets rinsed gently in several clear washes, then rolled in a towel to remove the excess water.


The final step is the blocking process. There are a number of ways to block a boutis piece, but I have found that the easiest metho…
16 comments
Read more

September 20, 2012
Esther Miller, was born into an Amish family in the U.S., and now lives in Germany where she has for many years taught the techniques and methods of Amish hand quilting to anyone interested in learning these skills. As a child, she would closely watch as the women of her community worked together on a quilt, and eventually she was rewarded with a needle of her own and encouraged to join the group. Through the years, she has mastered these skills and techniques and now generously shares them with anyone who has a genuine desire to learn.

Last week, at the "European Meeting of Patchwork" in Ste. Marie-aux-Mines, in Alsace France, www.patchwork-europe.com, I had the privilege of taking a 2 day workshop with Esther. The Amish quilting method requires a free-standing simple wooden frame upon which the 3 layers of the quilt have been stretched. To accomodate the 18 women in the class, Esther set up 3 quilt frames, with 6 students at each frame. Because the quilt is on a large, unm…
1 comment
Read more

June 13, 2011
The quilt exposition in Nantes "Pour L'amour du Fil" was filled with a number of highlights. Certainly one of the more memorable experiences was seeing the works of Yoko Saito in person.
"Elegant" is the word that best describes Yoko Saito's quilts. Although her palette is neutral, the lights and darks play very well together to create a perfect balance to the quilt. To say that the applique is amazing is an understatement. The perfectly formed 1/4" circles and the tiny leaves and stems are inspirational. And of course, the hand quilting is perfect. For the final touch, she uses embroidery as adornment in much the same way that the perfect pair of earrings complete the look of the little black dress. The opportunity to see her quilts in person has been truly inspirational.