June 19, 2018
In preparation for quilting my large bed quilt, auditioning stitching patterns and thread colours and weights has been an ongoing side project for the last several months.

Some of the questions I considered:
- Where is the focal point of the quilt? Is there more than one?
- How can I create relief around the motif to be highlighted?
- Which background filler is the most effective?
- Should contrast be created by the colour of the threads or by using varying weights of thread?  Or maybe a combination of both?

The 3 samples below are exploring the possibilities.

Sample 1 is stitched using the same colours and materials that are in the quilt: teal silk dupioni that has been stabilized, 1 layer of wool batting and a cotton backing. All of the samples are using design elements from the quilt itself.

In this first sample I tried my hand at thread painting with a contrasting colour. I used Magnifico, Superior's 40 wt. poly for the outline of the motif, and a 100 wt. silk for the background filler.

I wasn't at all sure that I would like the effect, but seeing it up on my design wall for the last several weeks, I'm beginning to think I might go that route for small portions of the quilt. 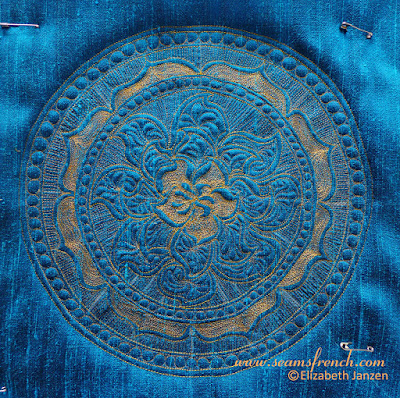 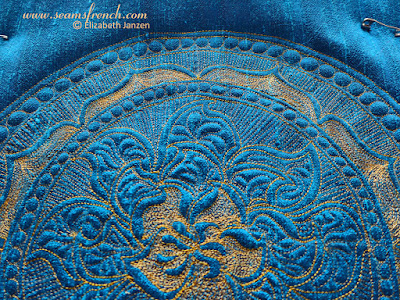 The second sampler below, also done on dupioni, is stitched using a variety of tone on tone threads. The object of this little study was finding background fillers that highlight the main motifs and add interest to the background. It's easy to see which fillers are the most effective for enhancing relief and which just blend into each other creating no variation in texture. 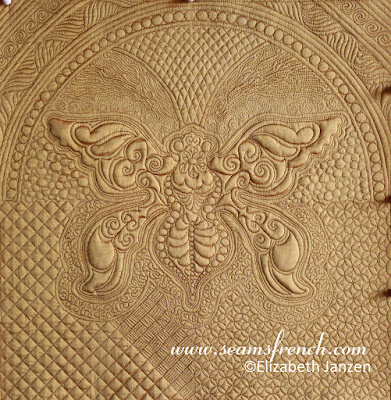 On the 3rd piece below, I'm sampling different weights of thread with a slight variation in colour. 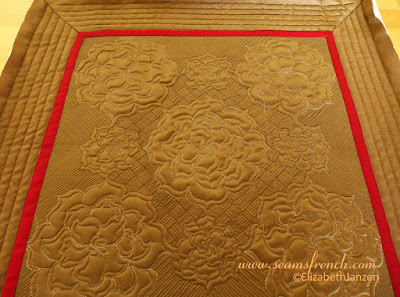 To accentuate the gardenias, I used Magnifico which is a heavier thread, as well as Tire thread, a 50 wt. silk. In both cases the colour was slightly lighter than the fabric. For the background gridwork, I used Superior's 100 wt. Kimono silk in a darker shade. Darker shades recede and disappear, adding highlight to the motif. My bobbin thread in all cases is Bottom Line, a 60 wt. poly, also by Superior. 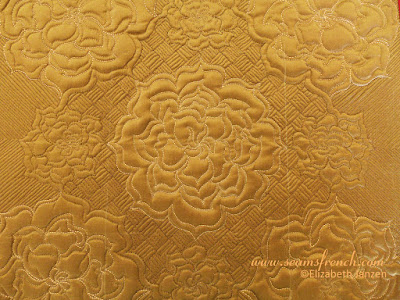 Finding a good balance of tension between the top and bobbin thread when free motion quilting is always a headache. After a long process of trial and elimination of many different types, weights and combinations of threads, I have found the most success with Superior's threads. Everyone has different preferences and all machines react differently, but my Bernina stationery machine seems to play nicely with this thread. Most of the time! ...... !!  Touch wood!!! 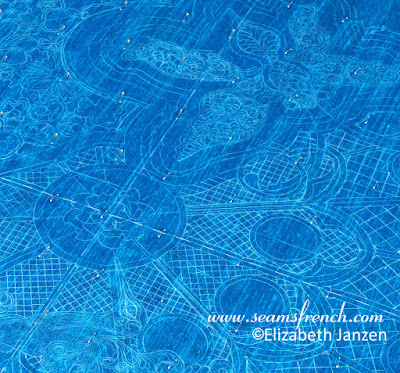 The large bed covering is finally set for quilting. The design has been transferred and the quilt is sandwiched. It's been a long process getting here, and now the fun really starts. Now, ......... all I need ......... is a large chunk of time.  Hmmmm... !