June 22, 2014
Central to this tabletopper is the floral boutis pattern designed by Mme. Francine Born of "Boutis Provence" (www.boutis.fr) that I stitched in a class on boutis with Mme. Born several summers ago in Montpellier, France. The linen/cotton surround is there to provide a framework to the boutis.


After the initial FMQ was completed, the tabletopper lacked energy and life. The particular linen I chose for this project presented a greater challenge then I had anticipated (see my post of May 23/14 http://seamsfrench.blogspot.ca/2014/05/traditional-boutis-meets-fmq.html). Other then removing the boutis from the background and starting again, (which was a less then thrilling prospect), I have tried to give warmth to the piece by embellishing it with contrasting embroidery threads, and, to add some relief, I have filled in the background with a small stipple stitch.

After the initial round of quilting, the stitches completed disappeared into the linen with the very fine tone on tone thread that I had used.  (This would be great at another time, but not for this particular linen). So for this round of remedial stitching, I switched to a heavier embroidery thread with a little contrast and sheen and over stitched parts of the design, hoping that it would highlight some of the areas and add a little life.

To enhance the relief, I used a small stipple stitch around the design motif in each separate petal. 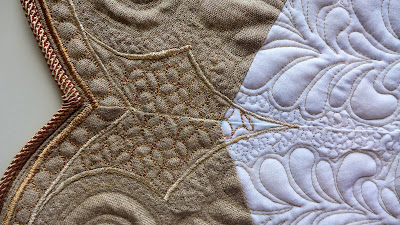 For the binding, I attached a piping very similar in colour to the warmer shade of the Viscose thread, and then completed the border by stitching a wider row of zig zag in that shade of thread.

With the addition of the stipple stitch to the background and with the embroidery threads highlighting parts of the design, there is now a little more life and relief to the quilt. However, lesson learned; next time I use linen in a quilted project, I will use only the very finest of linens with a much loftier batting. Slightly contrasting thread is also preferable when quilting linen.

Cording additional stuffing through each feather and channel of the motifs would achieve the desired effect, but for now, she will be what she is. Maybe someday?