July 31, 2014
Honestly, I have not fallen off the face of the earth, but sometimes, days and weeks just disappear! Vanish! Into thin air! How does that keep happening? Aside from enjoying the first summer in Canada for more then 8 years, I have been busy working on a number of new projects.

High up on my priority list has been designing and stitching up a number of new boutis patterns that are simple to stitch and quite manageable in size. Easy to pick up anytime and take along just about anywhere.

Below are two of the new boutis projects.

This first one, stitched on an amber coloured batiste, will be a needle envelope. Although I have used a variety of stitches around the cicada motif to add interest and give it a bit of emphasis, it can all easily be worked with the basic running stitch.

The first photo shows the needlefold being blocked after the stitching had been completed. I had to wet it and block it for a second time. The first time, I had not used nearly enough thumbtacks to keep it square as it dried. Here it is for the second blocking, with a second row of  thumbtacks added where seriously necessary. A whole second row would have been preferable, but I ran out thumbtacks. (I have since acquired 2 more boxes and am thinking that I may get more). 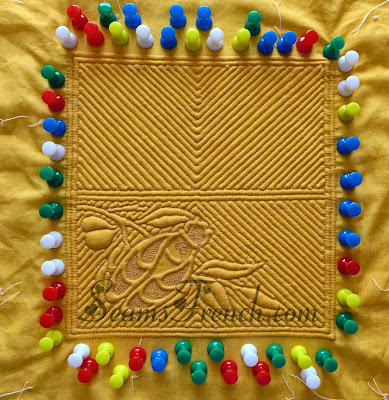 Another recent boutis project is this rose window design. This one was designed as a pin cushion, but in retrospect, I decided that I would prefer to use it in something else, like a a throw cushion or another table topper. Still deciding on it's ultimate destiny.

Below is the same rose window design, this time being stitched on amber batiste. This one will become a pin cushion and be a mate for the needlefold. I'll post progress reports.


Since I seem to have a "thing" for hummingbirds, one of the delights of the summer so far was watching the hummingbirds frequent this feeder while I was stitching on my boutis, visiting my sister at her summer cottage on Lake Winnipeg. New hummingbird design ideas are already in the works. More on that another time. 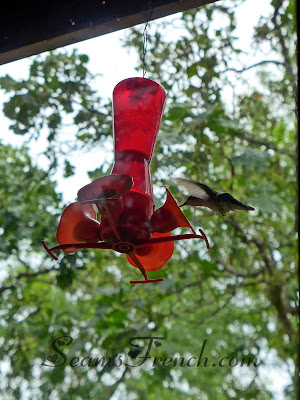