November 21, 2019
A sister project to "Boutis Blues", but with a brighter outlook, "Boutis Gold" represents hope and light. This project will require 8 - 10 of Medallion A, (see below)

To create boutis, two layers of a fine white Swiss cotton batiste are stitched together into channels and small closed shapes, and are later corded.


Although traditionally cotton thread is the thread of choice, my preference for detailed stitching like this has become a 50 weight silk thread. (I use Tire thread by Superior. It's available in Canada through Cindy's Threadworks. ) As well as being a pleasure to stitch with, the contrast of gold silk on a bright white background, adds a luminescence not possible with cotton thread.


Most of this project is stitched with a tiny back-stitch, (point d'arriere), one of the most frequently used stitches in boutis. The background filler, which acts almost like a stipple stitch, is a tiny running stitch. It's purpose here is to add a golden hue to this piece.

Below, the corded, finished medallion is held up against the light.  The negative space, (the stitched, but not corded areas) casts a golden luminosity to the piece. 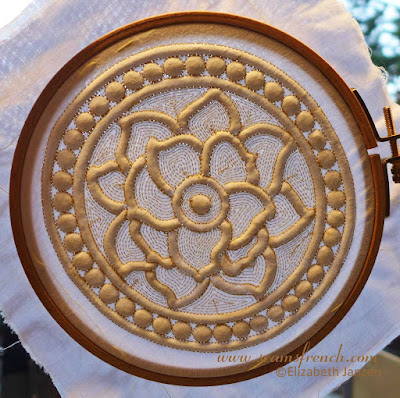