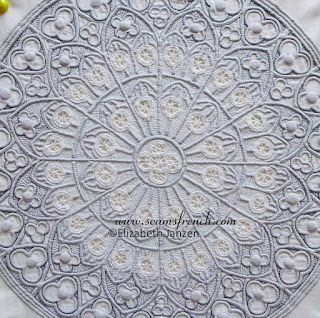 Stitched in white, restitched in shades of smoky blues and then finally corded, my boutis interpretation of the Notre Dame Rose window (Rose Sud) was finished over the summer. "Stitching the Boutis Blues", which was posted on October 10/2019, describes the inspiration and the evolution of this piece. 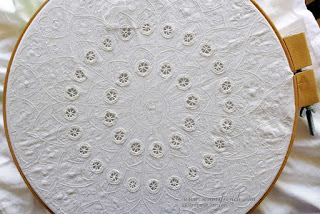 The original intent of the project had been to make a traditional white on white boutis piece. The addition of the cut out "rosettes", a technique that I had been wanting to try for a while, were added to lend a sense of luminosity to the window. With the rosettes done, the stitching was complete and the piece was ready to be corded. 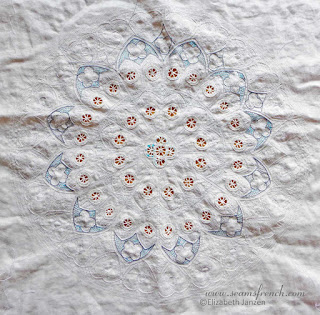 But then, on April 15, 2019, when much of  the Notre Dame Cathedral of Paris was destroyed in a devastating fire, a pristine, light interpretation of the rose window no longer seemed appropriate. I felt that the piece needed to be darkened, dirtied somehow, to convey this recent destruction.

To achieve this darkened smokiness, I started over stitching one row of arches with a simple stem stitch in a  smoky blue silk thread.  When the one row of arches didn't achieve the effect that I was going for, I added some blue background stitches to areas of the window that would not be corded, (almost like a stipple stitch is used when free motion quilting). (See above). Once that first row of arches was restitched, it became clear that the whole piece needed to follow suit. 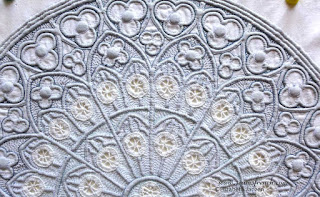 This was a gradual process and over the next few months, the stitching was completed, (for the second time), and the rose window was ready to be corded. But it wasn't until the Covid lock down in spring that I picked it up again and finished the piece with the cording. 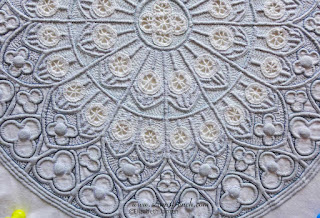 Traditionally, boutis is corded with a white cotton yarn, but in order to deepen the smoky hues, I chose a steel blue cotton yarn to cord through the pre-stitched channels. 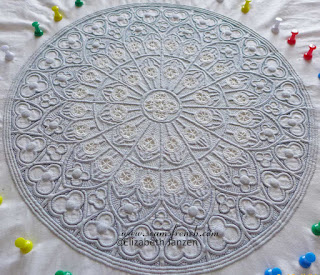 Now the smoky boutis Rose Window is complete. The last step will be to incorporate the rose window into a quilted framework, similar to the way I finished my  Boutis Hummingbird quilt.